Zak Showalter and Ethan Happ walked quietly down the middle of the court, arm in arm, away from Florida’s celebration of a last-second victory. END_OF_DOCUMENT_TOKEN_TO_BE_REPLACED

Clyde Stubblefield, a Madison music legend, former drummer for James Brown and one of the most sampled artists of all time, died Saturday of kidney failure. He was 73. END_OF_DOCUMENT_TOKEN_TO_BE_REPLACED

Wisconsin has used the same starting lineup for 59 of its past 60 games, so a change to that group will not be made casually. The Badgers are serious about getting themselves ready for March. END_OF_DOCUMENT_TOKEN_TO_BE_REPLACED

Green Bay’s star quarterback was chuckled at in November when he suggested the Packers would saddle up and “run the table.” END_OF_DOCUMENT_TOKEN_TO_BE_REPLACED

McGinn: Packers finally put it together

PHILADELPHIA – At long last, the Green Bay Packers have found a way to turn potential into performance.

They did it Monday night at Lincoln Financial Field with an ultra-efficient bashing of the Philadelphia Eagles, 27-13, to awaken in an NFC North Division race that is anything but decided.

This is what happens when the Packers play turnover-free football and execute with remarkable precision for 60 minutes.

“Our team has not blinked,” coach Mike McCarthy said. “We will be a better football team due to the route we traveled. We really needed this one.”

Even minus six starters due to injury, Green Bay has been capable of this type of showing throughout a four-game losing streak that caused some of its fans to begin writing off the season and hoping for major organizational change.

Now, by winning, the Packers will experience a far different narrative when they return home. They’re 5-6, two games behind Detroit (7-4) and one back of Minnesota (6-5) in the NFC North Division, and momentum is on their side for a change.

In the NFC, Green Bay is tied with the Eagles and New Orleans for the ninth-best record.

Of the NFC North contenders, the Packers and Vikings have three of their last five games at home whereas the Lions have just two home games remaining.

On paper, Minnesota has the easiest schedule: its opponents are 24-31. The Vikings hold the tiebreaker over the Packers by virtue of their 17-14 victory in Game 2, but they’ve also lost six of their last seven.

The last time the Packers were 5-6 was 2008, and they finished 6-10. Since then, they’ve made the playoffs every year, and that includes 2013 when they were 5-5-1 and would be without an injured Rodgers for four more games.

Now Rodgers is playing his best football in more than a year. That fact alone would make the Packers a dangerous opponent.

Operating a spread offense with patience and professionalism, Rodgers completed 76.9% of 39 passes for 313 yards and two touchdowns. His passer rating was 116.7.

“The first half was different this week,” Rodgers said. “We started the way we wanted to start.

“In the second half we finished with two great drives to close the game out. Our third-down percentage was great. The offensive line play was incredible.”

Rodgers suffered an injury to his left hamstring as he scrambled in the first series of the third quarter. With team functionaries covering Rodgers with towels to keep out prying eyes and cameras, trainers taped him and he finished the game.

“I just hurt my hamstring a little bit,” Rodgers said. “I felt tight in the first half for some reason. I’ll be fine. I tried to run around too much. I played through it and will be good to go next week (against Houston).

“I just didn’t want to be taped up on the television. I had to drop my drawers a little bit to get taped up. I just wanted the privacy of the tent.”

Discounting two kneel-down possessions at the end of each half, the Packers scored on five of their six other series while converting 10 of 14 third downs.

The Eagles, with a defense ranked fourth in points and eighth in yards, had won all four of its home games by allowing merely 38 points.

This time, they couldn’t get off the field (the Packers’ possession time was 35 minutes, 23 seconds) largely because their rush was stymied by the Packers’ stellar offensive line and instant-rhythm passing.

“We went back and forth,” Eagles safety Malcolm Jenkins said. “When we did try to tighten up and get some single high, they hit us with some big plays over the top. It was constantly trying to play cat and mouse, and disguising some things.

“At the same time, it’s not often you see an offense that’s patient enough to just have a 12-play drive where no plays are over 4 or 5 yards. All you’re waiting for is really one negative play and, most times when we got it, they either converted on third down or we got a penalty or…

The Internet Loves the Miley Pug 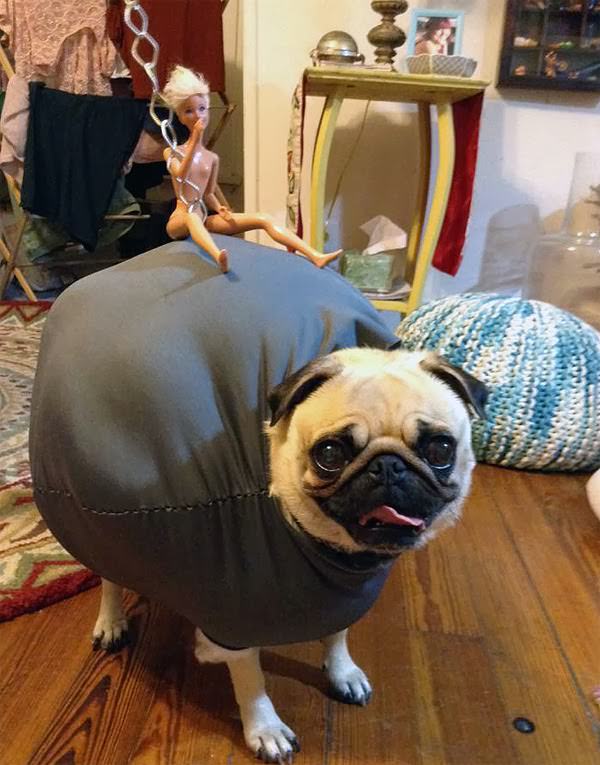 Miley may very well be the most famous person in America at this specific moment in time, but we had not found much reason to mention her name here at the blog. That is, at least not before meeting Tottie, the adorable pug dressed as the wrecking ball from Miley’s attention-grabbing video.