Kids’ Choice Awards 2017: Everything You Didn’t See on TV

It’s time for the youngest set of pop culture fanatics to shine, and we have host John Cena and Nickelodeon to thank for one exciting night ahead. END_OF_DOCUMENT_TOKEN_TO_BE_REPLACED

What we learned from WWE’s Elimination Chamber

John Cena returned to WWE SmackDown Live Tuesday night, but there was something oddly dark and slightly mean-spirited about his return promo. What was supposed to be a feel-good message (“I’m not leaving!”) turned into somewhat of a tirade that ranged from fiery to outright bitter. END_OF_DOCUMENT_TOKEN_TO_BE_REPLACED

Welcome to our WrestlingINC.com Live WWE SmackDown Viewing Party. We will be providing live ongoing coverage of tonight’s SmackDown, while you all can chime in with your thoughts throughout the show. END_OF_DOCUMENT_TOKEN_TO_BE_REPLACED

The pro wrestler gives this sketch comedy thing a go on December 10. Ben Affleck’s brother will hold it down the following week. Cena’s musical guest will be Maren Morris; Affleck’s is Chance The Rapper.

Don’t fret for Cena — this won’t be his first comedic acting gig. The squared-circle stud… 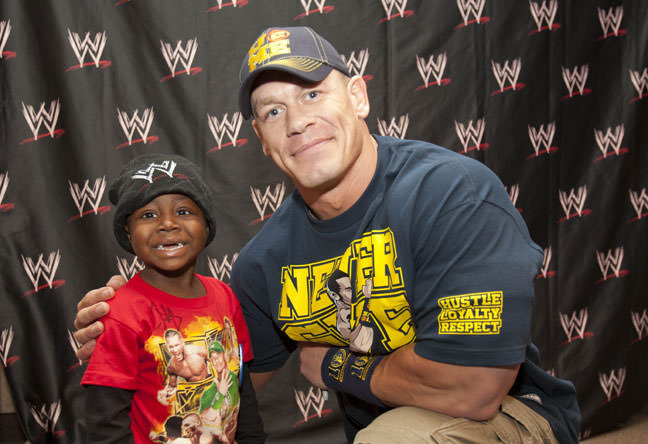 From Yahoo! News we’ve picked up this story of pro-wrestler, John Cena (PeekYou profile here), and his commitment to providing inspiration and hope to sick kids, through his work with the Make-a-Wish Foundation.