Stunners by Mexico, Switzerland shake up the World Cup — and especially Mexico City

Neither of the two favorites to win the World Cup — Germany and Brazil — was able to pull out a win in their opening matches Sunday in Russia, shaking up the field and shaking Mexico City enough to register as a seismic event. END_OF_DOCUMENT_TOKEN_TO_BE_REPLACED

Brazil 1st to qualify for World Cup, Argentina in danger

SAO PAULO — A resurgent Brazil squad under new management became the first team to qualify for the World Cup on Tuesday, the same day archrival Argentina heightened its risk of missing a spot at Russia 2018. END_OF_DOCUMENT_TOKEN_TO_BE_REPLACED

Fab Melo, the former Sagemont basketball standout who was a first-round pick by the Boston Celtics in the 2012 NBA draft, died in his native Brazil, military police said Sunday. He was 26. END_OF_DOCUMENT_TOKEN_TO_BE_REPLACED

Fab Melo, who was a center at Syracuse before moving to Brazil to play basketball professionally, died in his native South American country on Saturday. END_OF_DOCUMENT_TOKEN_TO_BE_REPLACED

CHAPECO, Brazil (Reuters) – The Brazilian town of Chapeco, its buildings draped in the green colors of its devastated soccer club, prepared on Saturday to receive the bodies of victims of an air disaster in Colombia that killed 71 people and wiped out the team.

The crash on Monday night shocked soccer fans the world over and plunged Brazil, South America’s biggest nation, into mourning. The BAe146 regional airliner operated by Bolivian charter company LAMIA had radioed that it was running out of fuel before smashing into a hillside outside the Colombian city of Medellin.

Only six people survived, including just three members of the soccer side Chapecoense en route to the Copa Sudamericana final, the biggest game in its history.

Reports in Brazilian media that the plane, which circled outside Medellin for 16 minutes while another aircraft made an emergency landing, had barely enough fuel for the flight from Bolivia have outraged relatives of the victims.

In Chapeco, a small agricultural town in southern Brazil, dozens of fans kept vigil at Chapecoense’s stadium, where an impromptu shrine swelled with fresh flowers and handmade posters. Green and black cloth was draped from fences, store fronts and construction sites.

Thousands of people in Chapeco in Brazil have held a vigil for the victims of a plane crash, who included most of the city’s football team.

Fans of the Chapecoense team walked from the town centre to the stadium where they prayed and sang. A service was also held in the city’s cathedral.

The team was flying to Colombia for the biggest match in their history when their plane went down shortly before landing in Medellin, late on Monday.

Six of the 77 people on board survived.

It is not clear what brought down the chartered aircraft, but some unconfirmed reports have suggested there was an electrical fault, while others say the plane was low on fuel. Both flight recorders have been recovered.

Brazil has begun three days of official mourning, while minute silences have been held at football grounds around the world.

Some 10,000 people – including family members of the players – gathered in Chapeco’s Arena Conda stadium on Tuesday evening, still stunned by the news from earlier in the day.

“It is really hard to speak. We always come to the games. We’d come to the stadium and sit right in the same spot,” said fan Daniel Marline.

“And we came here today, we sat here, but we know that this weekend, next week, our fighting team won’t be here anymore in this stadium…. 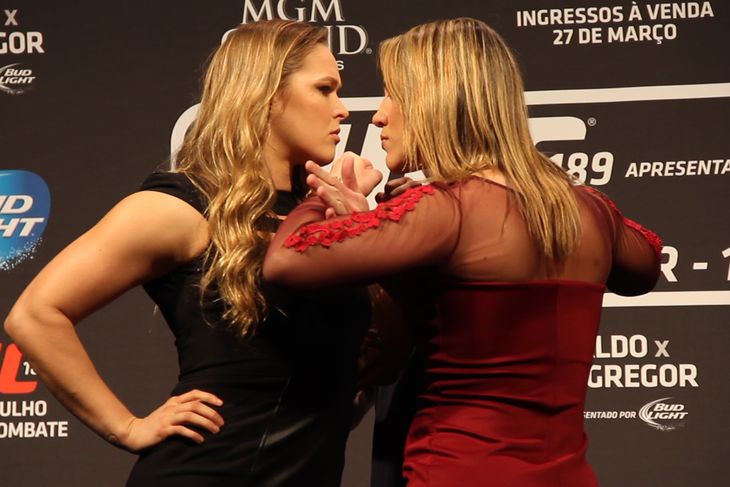 Ronda Rousey, the biggest name in women’s MMA and one of the biggest in the whole sport, remains the undefeated UFC women’s bantamweight champion, after knocking out contender Bethe Correia during a bout on Saturday. A fight that lasted a whopping 34 seconds.