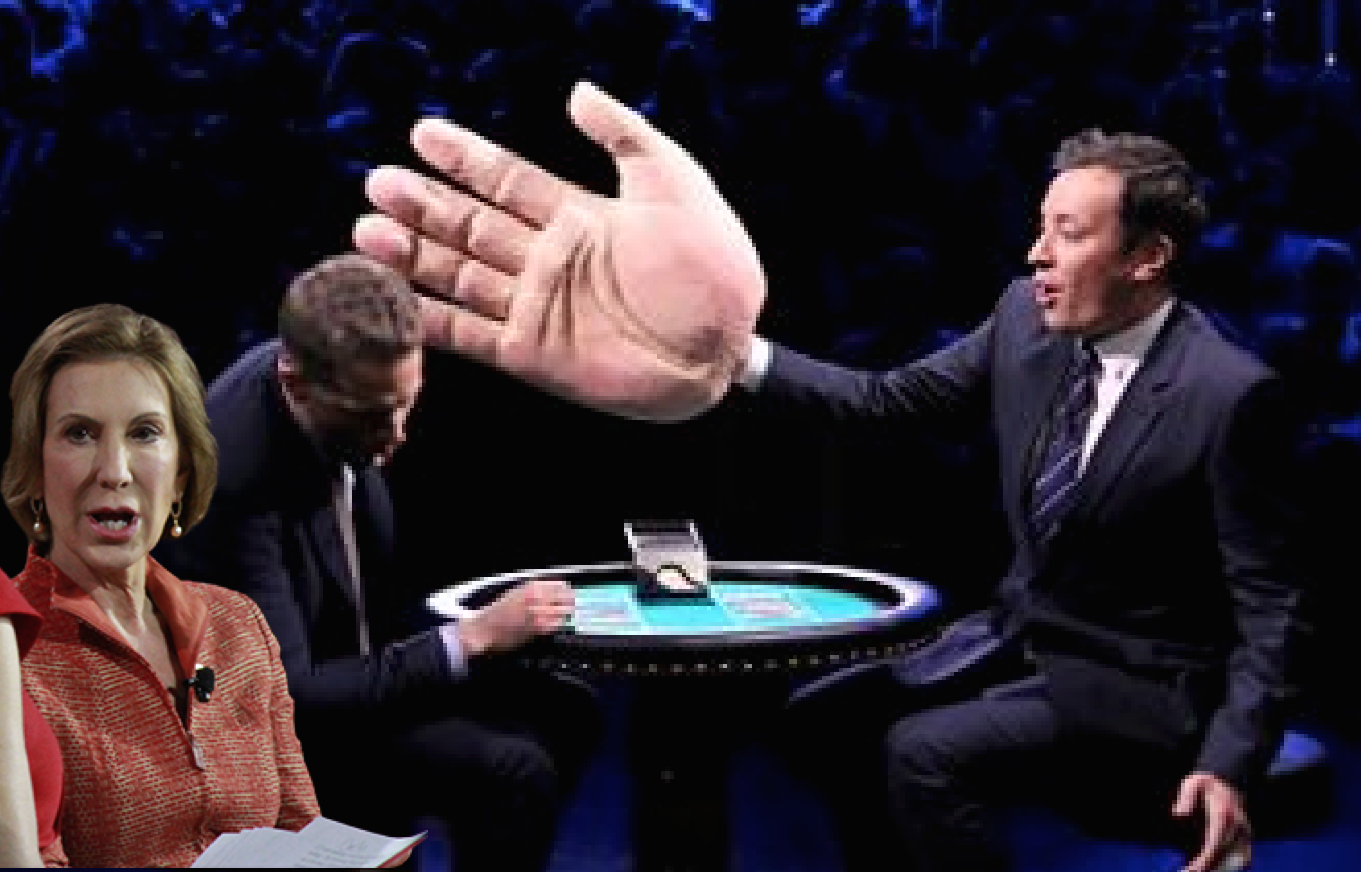 The Tonight Show Starrring Jimmy Fallon is viral this morning for two different segments from last night’s episode — as will sometimes happen. We’ve decided to combine the two into one, single hopefully entirely coherent if only somewhat congruous entry.

First, Jimmy welcomed not just the GOP’s, but frankly American politics’ person of the moment, former Hewlett-Packard CEO Carly Fiorina, who after making an impressive appearance at last Wednesday’s Republican debate, has found herself polling as the party’s 2nd place candidate behind the thus far rather dominant — although we’re still not quite used to typing that — Donald Trump.

Among her memorable moments were her openly contradicting a recently controversial opinion shared by fellow GOP candidate Ben Carson, stating that she would have no problem whatsoever with a Muslim president. She also suggested — having met both men — that Vladimir Putin and Mr. Trump have a lot in common; before recounting her meeting with the Russian president, describing him as both charming and formidable, but then stressing that he is in no uncertain terms dangerous. She then emphasized her strong disagreement with Trump’s proposal for a policy of open negotiations with Russia.

But Jimmy’s show ain’t Meet the Press after all, so things did end on a fun note, as — at Jimmy’s request — the former CEO sang a couple of verses of a tune she made up about her dog Snickers. You can check it out for yourself below.

Okay, that’s all well and good, but wasn’t there a water balloon contest, or some sort of quiz show with big foam hammers, or some kind of schticky bit of the sort Jimmy loves to do with his guests?

Well, yes, but not with Ms. Fiorina. Jimmy had, however, seen to it that the pec-tacular and more genuinely witty and likable then you want him to be Ryan Reynolds was also on the show. The soon-to-be Deadpool was on the show to promote his new flick Mississippi Grind, and what better way to promote the gambling themed flick than with a game of blackjack involving ludicrously massive gag prop hands, used — of course — to slap one another (winner slap loser, in case there was any confusion).

Enjoy that fun below, and remember that the clicking of all the highlighted names above will lead you to what PeekYou really does, which is index the public web presences of people on the Internet; as you’ll find stacks of links to the best of what the Web has to share of the corresponding topics.

But now, watch handsome men slap each other with big fake hands, because that’s what America’s all about.