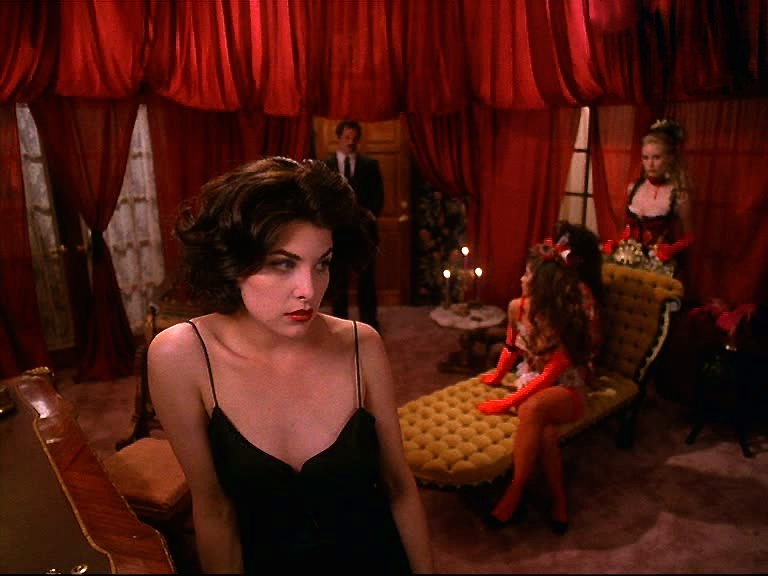 A new box set of early-90s cult-TV drama, Twin Peaks, will be released on July 29. It will include almost 90-minutes of never-before-seen footage (deleted and alternate scenes) from the series’ big screen prequel flick, Twin Peaks: Fire Walk With Me.

The gleefully peculiar program — which is often erroneously described as a mystery, but which contained no coherent or solvable puzzles at its heart — ran on ABC for two seasons beginning in 1990. It was the brainchild of eccentric, visionary filmmaker David Lynch (PeekYou profile here), and writer/producer Mark Frost.

The show, more or less, told the story of Special Agent Dale Cooper (played with endearing strangeness by Kyle MacLachlan; PeekYou profile here), a G-Man sent to the secluded, presumably Pacific Northwestern town of Twin Peaks to investigate the brutal murder of popular high school student, Laura Palmer. Over the course of the program’s two seasons, Cooper and the audience are dragged into the dark, surreal heart of the, at first, seemingly idyllic hamlet; as we learn the strange and varied secrets of its many inhabitants.

In 1992 the prequel film Twin Peaks: Fire Walk With Me hit theaters; clearing up nothing, and happily making the whole thing all the more inscrutable.

David Lynch released a statement, regarding the unreleased footage included in the box, which said; “During the last days in the life of Laura Palmer many things happened, which have never been seen before. They’re here now alongside the new transfer of Twin Peaks: Fire Walk With Me and Twin Peaks, the television series.”

Entertainment Weekly has this exclusive teaser trailer below:

And as a bonus, David Lynch discussing where his ideas come from (a banal question with a compelling answer):