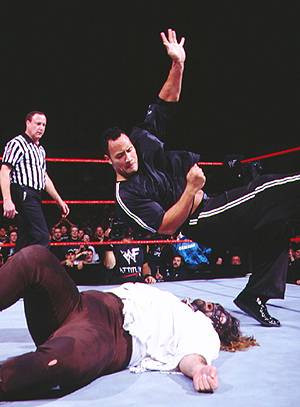 Dwayne “The Rock” Johnson (PeekYou profile here) is, of course, a sometimes pro wrestler, and sometimes actor. He is also one of the most viewed profiles on PeekYou this week.

Shown above administering his apparently populist finishing move, “The People’s Elbow” on a supine Mick “Mankind” Foley, Dwayne is both the son and grandson of legendary pro wrestlers. While as a younger man he was determined never to join the family business, after a successful college and failed professional football career, he wound up not only doing so, but becoming one of the biggest stars — both in and out of the ring — that pro wrestling ever produced.

Click through to Dwayne’s PeekYou profile at the link above to explore the many corners of cyberspace where his presence can be felt.