Time Honors Ebola Fighters as ‘Person of the Year’ 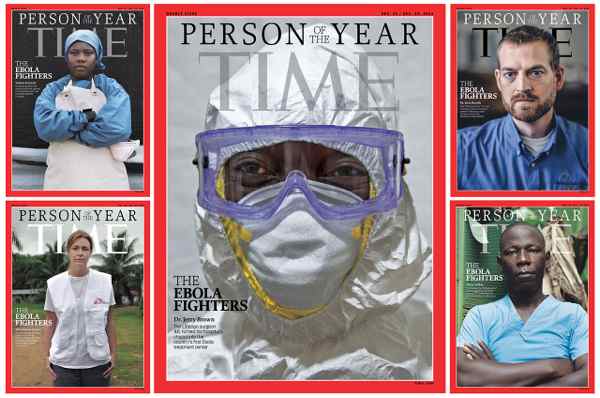 In 1927, Time Magazine selected transatlantic aviator Charles Lindbergh as their first ever “Man of the Year” (a distinction later, appropriately renamed “Person of the Year”).

Since that time they have annually selected a person — and sometimes an object, concept, or group of people — that they believe “for better or for worse” has had the greatest impact on that year’s events. This year, Time quite correctly has bestowed this distinction upon not an individual, but upon all the brave men and women who have risked personal health and well-being to help combat the outbreak of the deadly Ebola virus that has devastated western Africa, and impacted many far flung corners of the globe.

Time explains the reasoning behind their selection here.

From Martin Luther King, Jr. to Adolph Hitler, from Mark Zuckerberg to Pope John Paul II to the “The Middle Americans,” Time‘s “Person of the Year” selections have run the gamut from the clearly deserved — such as this year — to the esoteric, and have frequently been the stuff of controversy.

The names below are the 10 still living recipients of this sometimes dubious honor who have — at this moment in time — made the most profound impacts in cyberspace. We’ve measured them on our PeekScore scale, not assessing their values as humans, nor even their respective degrees of global fame in the grandest senses, but gauging their relative impacts and presences here on the Web.

Clicking the items on the list below will lead you to the corresponding individual’s PeekYou profile, from where you can explore the best of what the Internet has to offer of their life, work, and career.