There’s Been A LOT of Snow in Canada this Winter 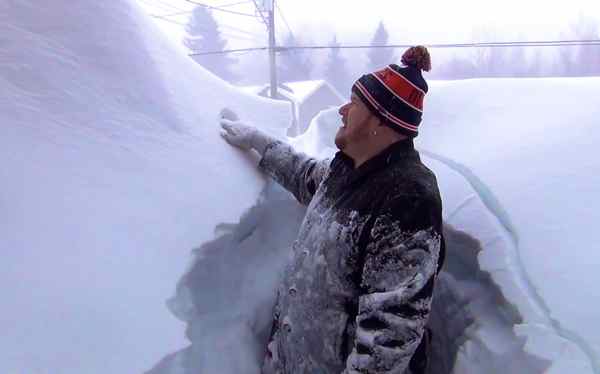 Kevin McGrath (aka, DCompose), a YouTuber from Dieppe, New Brunswick, Canada, has gone viral this week with a video illustrating in rather mind-boggling terms just how much snowfall the Maritime provinces have received this winter.

An avid vlogger anyway, documenting the aftermath of a recent blizzard was a natural. He explained to CBC; “I looked outside, saw this huge snowbank and I thought, ‘Whoooo, this will be interesting to film and show other people what it’s like to be a Maritimer.'”

The video he shot this past weekend depicts a house rather frighteningly snowed in, with drifts of up to 9 feet.  Kevin opined, “[People] don’t realize how bad it gets here, but it’s such an open area, there’s not a lot of buildings. It’s not like in the bigger cities, a lot of wind and a lot of drifting. It accumulates quite fast.”

PLEASE BE WARNED, there’s a fair bit of profanity in the video below (as there might be in your own, were you dealing with 9 feet of snow). But if that doesn’t bother you, do please watch in awe and gratitude — provided you yourself are not snowed in — as we have done. And click Kev’s name above to visit his PeekYou profile, from where you’ll be led to loads of other videos, his social pages, his blog, and much more of the sorts of things PeekYou profiles contain.