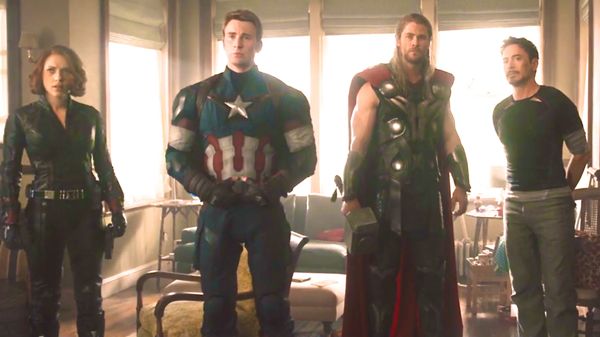 On Wednesday morning, Marvel‘s social media team took to Twitter, and tweeted out the below.

The faithful responded accordingly, and throughout the day #AvengersAssemble could be found among the top trends. As anyone half-sane would have anticipated, the trailer was successfully “unlocked” and oh boy is it a doozy.

The film — in case you’re somehow unaware — is of course the sequel to 2012’s $1.5 billion grossing The Avengers, from writer/director Joss Whedon; who is returning for Ultron.

That flick, like the comic book which inspired it, brought together a cornucopia of Marvel heroes, many already with their own adjacent headlining film franchises. On hand for the CGI brouhaha and costumed sturm und drang are Robert Downey, Jr. as Iron Man, Chris Hemsworth as Thor, Mark Ruffalo as The Hulk, Scarlett Johansson as Black Widow, and Jeremy Renner as Hawkeye.

This time around the film has a new titular heavy — heretofore unseen in the Marvel cinematic universe — Ultron; the big bad robot voiced (unmistakably) by James Spader, in that charismatic yet unnerving way he does pretty much everything.

Samuel L. Jackson, who has played Nick Fury in a number of Marvel films to date, and Cobie Smulders also star.

Check out the trailer below and remember that clicking the highlighted words above will lead you to other areas of PeekYou from where you can learn more about the corresponding topics. We recommend it. A splendid time is guaranteed for all.