The Story Behind ‘The Hug Felt Around the World’ 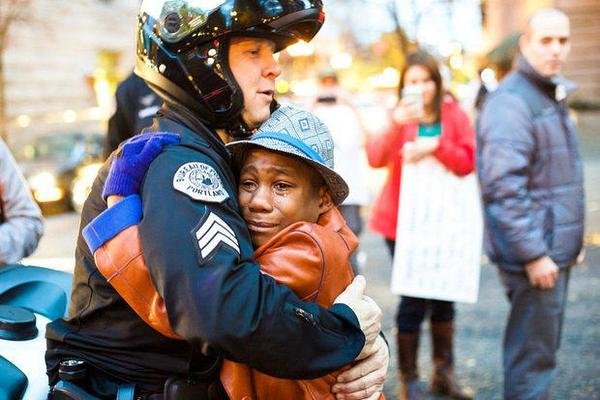 A simple photo, putting into clear visual terms how a lot of us are feeling right now, is blazing across the internet this weekend. Some are calling it “the hug felt ’round the world.”

The picture, which you can see above, was shot by 21-year old Johnny Nguyen; a freelance photographer from Portland, Oregon.

The image, destined to become iconic, was snapped by Nguyen during a Ferguson-related demonstration in Portland on November 25th. It shows Portland PD Sgt. Bret Barnum hugging 12-year-old Devonte Hart, the latter with tears in his eyes.

It would almost seem too on-the-nose, were it not for the very organic and entirely sincere way that it transpired. Real people feeling real emotions, during a very trying time.

From Barnum’s recounting the embrace occurred during the rally’s beginning. With speakers addressing the crowd and tensions high, Barnum spotted a crying Hart standing amongst a group of people, holding a sign that said “Free Hugs” (the sign can be seen below). 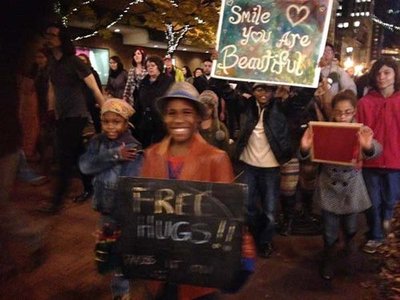 The Sergeant called Hart over, and the two began speaking about the demonstration, and what The Oregonian describes as “school, art and life.” Before they parted ways, Barnum pointed to Devonte’s sign and inquired, “Do I get one of those?” This incredible photo shows us Hart’s response.

As the photo began to spread, Devonte’s parents took to Facebook, publishing a post which explained things more in depth, and painted a fuller picture of this extraordinary young man.

We hit the streets (Nov. 25) with the intention of spreading love and kindness, and to remind (ALL) people that they matter in this world. … I noticed Devonte was struggling. Tears. He wouldn’t speak. He was inconsolable. My son has a heart of a gold, compassion beyond anything I’ve ever experienced, yet struggles with living fearlessly when it comes to the police and people that don’t understand the complexity of racism that is prevalent in our society. …
It was one of the most emotionally charged experiences I’ve had as a mother. He trembled holding a Free Hugs sign as he bravely stood alone in front of the police barricade. Tears rushing from his eyes and soaking his sweater, he gazed upon them not knowing how they would react. After a while, one of the officers approached him and extended his hand. Their interaction was uncomfortable at first. … There were generic questions about his favorite subject and what he liked to do in the summer, but the one that mattered hit straight to the heart. He asked Devonte why he was crying. His response about his concerns regarding the level of police brutality towards young black kids was met with an unexpected and seemingly authentic (to Devonte), “Yes. *sigh* I know. I’m sorry. I’m sorry.” The officer then asked if he could have one of his hugs.

After the immortalized exchange and its outcome, Devonte rejoined his family and friends and Sgt. Barnum resumed his duties. Hopefully the moment they shared, and what it symbolizes, will resonate for at least a little while longer.