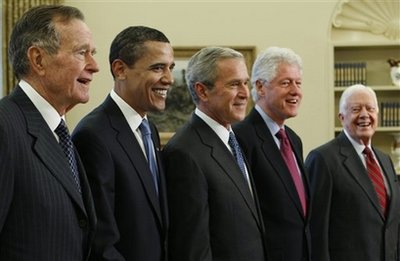 Below are the ten men currently walking the Earth who can say “hey, to heck with you, I was and/or am the President and/or the Vice President of these here United States… What have you done? That’s right, NOTHING! NOW GET OUT OF HERE!”

Per usual, we’re not sizing up the successes and/or failures of these men as commanders or executives, we’re simply using our PeekScore scale to report on how present, active, and influential each of these men is in cyberspace.

It will shock no one that our current president tops our list, and it should shock few that his predecessor is essentially tied with him for the top spot. The greatest upset, one might contend, comes in the form of the 45th Vice President beating the 39th President, but as surprises go this one is rather slight. Perhaps, instead, the big story is that this time around, unlike in their 1992 face-off, Bush the Elder beat a certain former Arkansas governor. We’ll let you decide.

Clicking the items on the list below will lead you the corresponding statesman’s PeekYou profile, from where you can access the best of what the Web has to share of his life and estimable career.