‘The Interview’ Pulled by Most Major U.S. Theater Chains (UPDATED) 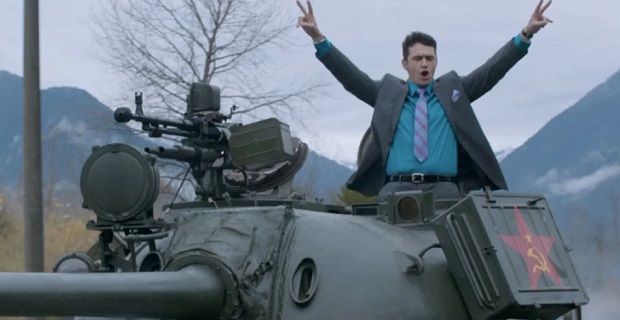 Threats being made in relation to Sony Pictures‘ planned Christmas Day theatrical release of the comedy The Interview — starring James Franco and Seth Rogen — are being taken at least somewhat seriously.

UPDATE: Since posting the bulk of this entry, Sony Pictures has announced that they have “no further release plans for the film,” and are pulling the plug on the release altogether. You can read more about this at Variety here.

No one knows for certain whether or not the recent and costly hack of Sony Entertainment‘s email accounts was a direct act by North Korea, but that is one popular theory. While much of the media has treated it all as a juicy showbiz gossip story, some are regarding it as something potentially more serious.

The group responsible, who dub themselves Guardians of Peace, posted this list of threats — composed in their characteristic broken English — on Tuesday:

1. We will clearly show it to you at the very time and places “The Interview” be shown, including the premiere, how bitter fate those who seek fun in terror should be doomed to.

2. Soon all the world will see what an awful movie Sony Pictures Entertainment has made.

3. The world will be full of fear.

5. We recommend you to keep yourself distant from the places at that time.

7. Whatever comes in the coming days is called by the greed of Sony Pictures Entertainment.
All the world will denounce the SONY.

Rogen and Franco announced earlier that they’d be canceling all press engagements to promote the film, and a New York premiere was canceled as well. Most recently the news broke that four of the United States’ five major theater chains (Regal Cinemas, Cinemark, Cineplex, and AMC Entertainment) — with the full cooperation of Sony — will either delay the opening, or simply not be screening the film at all. More exhibitors are expected to follow suit.

The film — which appears to be a mostly goofy comedy rather than a pointed political satire — tells the story of a light-entertainment talk show host played by Franco who manages to, along with his producer Rogen, book an interview with North Korean supreme leader Kim Jong Un. From there, the CIA seizes upon their access and taps the pair to assassinate the hermit kingdom’s dictator.

North Korea expressed their disapproval of the film’s themes, in no uncertain terms, a number of months ago now.

Sony insists that The Interview will see the light of day in some form, but it’s not known for certain now when or how.

The Department of Homeland Security released a statement this week assuring that there was no evidence of an active plot related to this film’s release, but the exhibitors are taking a sympathetic “better safe than sorry” approach.

“It’s much less of a big deal to pull the film than it is to risk something happening,” said Eric Wold, an exhibition industry analyst, in an interview with Variety. “It makes no sense for a theater to choose to show this movie.”