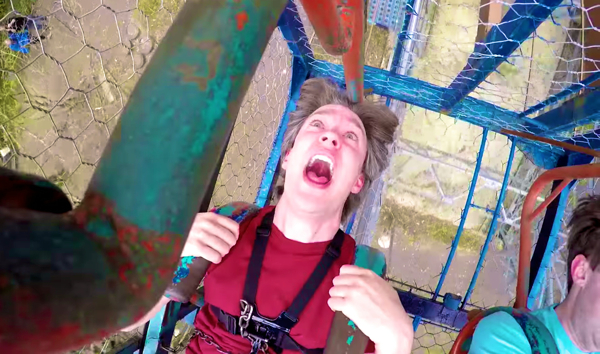 In the foothills of northeastern Italy’s Dolomite mountains can be found Ai Pioppi; a restaurant with a remarkable twist.

The “kinetic-art playground,” as Tom calls it, was built over forty years ago, and is free for use by all who patronize the restaurant.

While having seen some footage of the attraction prior, Tom had doubted that it could be quite what it seemed. He waited for Easter weekend, when things would be slow, to head out and see it for himself.

One does take ones life in ones own hands when climbing aboard the Ai Pioppi rides (American east coasters of a certain age may even think it brings to mind the beloved deathtrap that was Action Park), and Tom himself did not leave his visit unscathed. But he ensures we viewers that his injury — reported at the clip’s end (but not shown occurring) — was entirely his fault.

Anyway, the video explains it all far better than we could, as it really does just need to be seen to be believed. Clicking Tom’s highlighted name above will lead you to his PeekYou profile, where you’ll find links to the many far flung corners of cyberspace where further vids, writings, and countless projects created by Tom can be found.