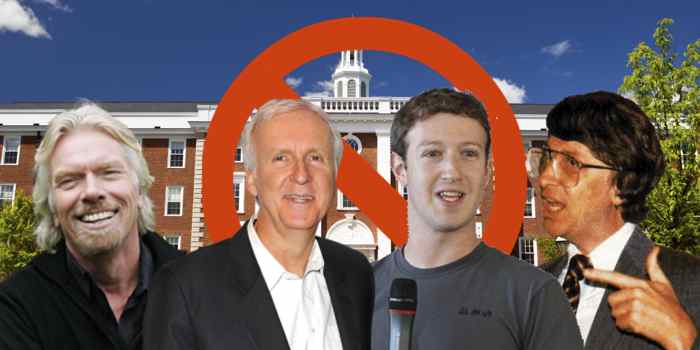 There’s a not a college degree to be found among the lot of them, yet we doubt they ultimately broke their mothers’ hearts too badly.

Now, you could well expect reasonably healthy PeekScores from a bunch of dropouts, as it stands to reason that they would have little to do with their lives apart from tweet, blog, and update their Facebook pages.

But, you see, this is not a bunch who are chilling in their parents’ basements, while they “figure some stuff out.” This band of 20 go-getters are nearly all millionaires, and many are actually billionaires (and some of them busied themselves inventing stuff like the above-referenced tweeting and Facebook pages).

We’re not here to quantify and compare their successes in terms of dollars and cents, though, nor even assess their relative worths in terms of accomplishments or importance. We’re just here to see how they measure up in the digital footprint department, and it seems that these dropouts are making their marks here in the cyberspace pretty well.

It should be noted that if we were to include entertainers and athletes, this list could quickly become unwieldy, so we kept it mostly to the world of business. Also, this is in no way an endorsement of the choice to forgo higher education, just a fun list on the Internet. STAY IN SCHOOL, KIDS!