The Cast for the ‘Ghostbusters’ Reboot Has Been Announced 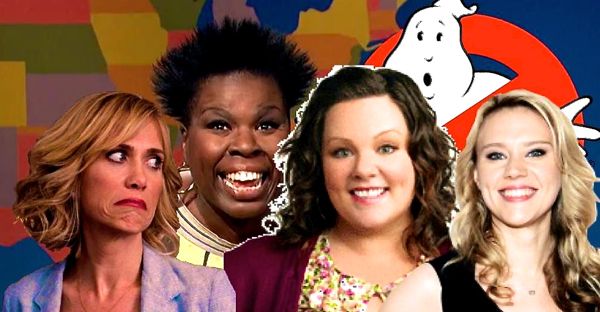 The three months of rumor and speculation regarding Bridesmaids director, Paul Feig‘s proposed, female-starring Ghostbusters reboot have finally led us to some concrete and immensely promising announcements.

As has been reported by Deadline, the four funny ladies who will be donning the coveralls and proton packs — pending still ongoing negotiations — will be; comedy superstar Melissa McCarthy, SNL alum Kristen Wiig, and current SNL cast members Kate McKinnon and Leslie Jones.

Wiig has worked with Feig previously on the critical and commercial hit Bridesmaids, which she also co-wrote, and McCarthy has collaborated with him on that flick as well as 2013’s hit The Heat. McKinnon is one of SNL‘s brightest lights of recent years, and Jones while a comedy veteran is new to the SNL cast this season, where she’s quickly made her mark as one of the program’s most reliable laugh-getters.

The original Ghostbusters was, of course, a 1984 megahit, paranormal comedy starring Bill Murray, Dan Aykroyd, Ernie Hudson, and the late Harold Ramis. Feig has been careful to stress that this new version is a reboot and in no way a sequel. Says the director, “I love the first one so much, I don’t want to do anything to ruin the memory of that.” Adding, “So it just felt like, let’s just restart it because then we can have new dynamics. I want the technology to be even cooler. I want it to be really scary, and I want it to happen in our world today that hasn’t gone through it so it’s like, oh my God what’s going on?”

The script to this promising flick is being written by Katie Dippold, who co-wrote The Heat. The film is slated for a July 22nd, 2016 release date.

Clicking the highlighted names above will, as always, lead you to the corresponding individual’s PeekYou profile from where you can explore the best of what the Web has to offer regarding their lives and careers.