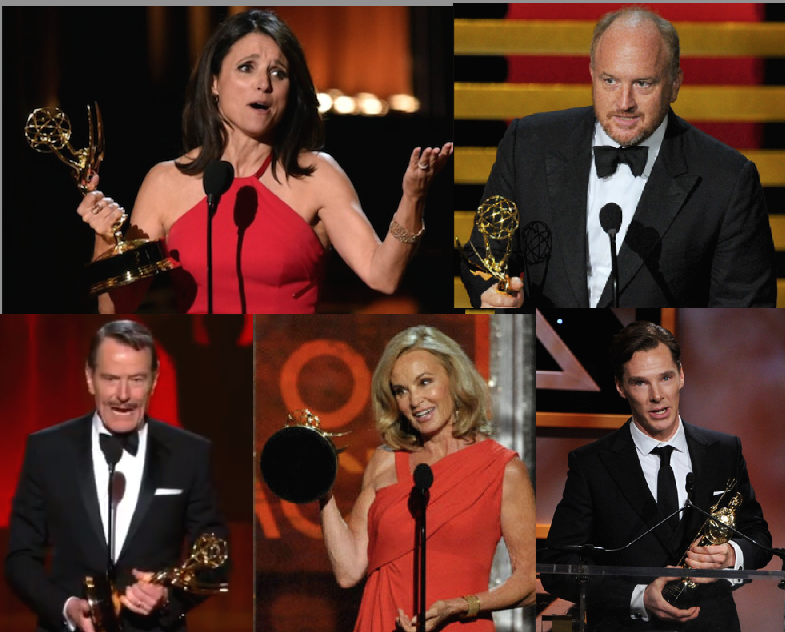 On Monday night, the 66th Primetime Emmy Awards took place and we’re taking a moment to provide a brief round-up.

You can see the full winner’s list here, but below we’ll cherry pick some of the winners we found of particular interest.

As for the broadcast itself, it was a bit lackluster. Host Seth Meyers was amiable as always, but a bit safe and not displaying the full degree of his humor. Opinions on his performance seem to vary, but few report being bowled over. Which is fine, of course.

The big winner of the night was AMC‘s widely celebrated Breaking Bad, which went off the air almost exactly a year ago. Bad walked away with an outstanding drama statue, as well as acting awards for star Bryan Cranston, and co-stars Anna Gunn and Aaron Paul.

BBC‘s Sherlock ended their two-season Emmy dry-streak with a whopping 7 wins in the “miniseries or movie” category; including acting awards for Benedict Cumberbatch and Martin Freeman, and a writing award for series co-showrunner, Steven Moffat.

The obligatory awards show “In Memoriam” section — remembering those industry notables who have died over the past year — concluded with a tribute to Robin Williams, given by his old friend and collaborator Billy Crystal. We’ve included it below.

Below that, we’ve embedded what may be the evening’s most memorable moment, shared between a certain Elaine Benes and Dr. Tim Whatley.

Clicking through any of the highlighted words above will lead you to other parts of PeekYou from where you can explore each and any of these topics more in depth, via the mountains of relevant and related media to be found throughout the digital landscape.

And here’s the water-cooler moment: