Quarterback Colin Kaepernick might be playing his final game for the San Francisco 49ers against the Seattle Seahawks this Sunday. And its fitting for the signal-caller to go up against his long-time nemesis. END_OF_DOCUMENT_TOKEN_TO_BE_REPLACED

Green Bay’s star quarterback was chuckled at in November when he suggested the Packers would saddle up and “run the table.” END_OF_DOCUMENT_TOKEN_TO_BE_REPLACED

Wednesday Round-Up: Two Seahawks Make ESPN’s ’10 Players Who Should Have Made The Pro Bowl’ List

Here’s a look at what’s “out there” for today —Wednesday, December 21 — about your Seattle Seahawks:

With the help of NFL personnel evaluators, ESPN senior writer Mike Sando compiled a list of 10 notable players who should have made the 2017 Pro Bowl.

Two Seahawks players made Sando’s list, in tight end Jimmy Graham and linebacker K.J. Wright. One evaluator described Graham as a top-five player at his position, while another said Wright doesn’t get enough credit for his abilities:

“My Lord, Graham is playing like a Pro Bowler,” an AFC personnel evaluator said. “I would absolutely take him over Jordan Reed. Graham is a top-five tight end right now.”

One personnel evaluator said he’d take Wright over teammate Bobby Wagner, who made the NFC Pro Bowl roster at middle linebacker. That was less…

RENTON, Wash. (AP) For the first half of the season, Cliff Avril, Michael Bennett and the rest of the Seattle Seahawks defensive line were able to create havoc, getting into the backfield and making opposing quarterbacks aware of their presence. END_OF_DOCUMENT_TOKEN_TO_BE_REPLACED

Thomas left the game with a broken bone in his leg after colliding with teammate Kam Chancellor in the second quarter, making him out indefinitely.

While Thomas’ status was unknown to fans watching the game, he sent a tweet that shocked many.

This game has been so good to me…

SEATTLE (AP) — The missing necktie that cost Carolina’s Cam Newton one play is insignificant compared to what the Seattle Seahawks lost on Sunday night. END_OF_DOCUMENT_TOKEN_TO_BE_REPLACED

SEATTLE (AP) – By this point, they might as well consider Seattle and Carolina a divisional game.

For the seventh time in five years, the Panthers and Seahawks will meet on Sunday night each with a different sense of urgency heading into the final month of the regular season.

Seattle (7-3-1) reverted to its inconsistent form of earlier this season in a loss last week to Tampa Bay that now leaves the Seahawks, while still in complete control of the NFC West, with no room for error in trying to hold off others in the NFC for the No. 2 seed and a coveted first-round bye in the playoffs.

The level of urgency is far greater for the defending NFC champion Panthers.

After last week’s loss in Oakland , the Panthers (4-7) are three games behind in the NFC South race and 2½ games behind Washington for the final wild-card spot with five games to go.

There is time for Carolina, but it’s running short to avoid joining the list of Super Bowl participants to miss the postseason the following year.

“We’ve lost five games by three points or less. We had opportunities to win football games down the stretch and didn’t do it,” Carolina coach Ron Rivera said.

“Those are things that unfortunately we just didn’t do. We did it last year and that’s probably the hard pill to swallow.”

There’s also the Super Bowl hangover, something that Rivera acknowledged researching what Seattle coach Pete Carroll did following the back-to-back trips by the Seahawks to the championship game to try and figure out ways to avoid a swoon by his team.

“I think it’s got a little bit to do with it. The truth of the matter is if you win the first game, things can be different. Unfortunately we didn’t, so we have to battle uphill,” Rivera said.

Unlike the Panthers, thus far at least, Seattle was able to overcome early troubles following both of its Super Bowl trips to find a way back to the postseason.

“I think you have to be prepared for it way before you ever get to it,” Carroll said.

The Panthers are 4-7 one season after reaching the Super Bowl, and according to Richard Sherman, the poor season might be some karmic payback for disrespecting the 12th Man.

The Tampa Bay Buccaneers were not expected to beat the Seattle Seahawks Sunday. Not only did the Bucs win, they turned in a dominant defensive effort.

Tampa defenders sacked Seahawks quarterback Russell Wilson six times and intercepted him twice in a 14-5 victory to keep playoff hopes alive. Offensively, the Buccaneers were led by receiver Mike Evans, who had his way with the Legion of Boom. He finished with eight catches for 104 yards and both of the game’s touchdowns.

Tampa Bay (6-5) remained just a game back of the Atlanta Falcons (7-4) in the NFC South. The Buccaneers are also just half a game back of Washington (6-4-1) for the final wild-card spot in the NFC. The Falcons dealt a blow to Arizona’s playoff chances with a 38-19 win over the Cardinals at the Georgia Dome.

The Seahawks (7-3-1) still have a comfortable lead in the NFC West with every other team in the division also losing. The Cardinals (4-6-1) lost in Atlanta while the Los Angeles Rams (4-7) were clobbered by the New Orleans Saints and the San Francisco 49ers lost their 10th straight with a 31-24 defeat in Miami.

The defending NFC champions appear done after Carolina fell to 4-7 with Sunday’s 35-32 loss in Oakland.

The Saints (5-6) also stayed alive in the NFC playoff hunt with their dominant 49-21 victory at the Superdome. They sit 10th in the NFC, but can gain ground with two games remaining against the Buccaneers and the season finale at Atlanta. Four of New Orleans’ final five games are indoors, where Saints quarterback Drew Brees has thrived.

The Dolphins and Bills helped themselves in the AFC. Miami held off a final charge by the 49ers to move to 7-4 and into a tie with the Denver Broncos for the sixth spot in the AFC. Sunday’s 30-27 win over the Broncos pushed the Kansas City Chiefs to within a game of the Raiders (9-2) in the AFC West and securely into the top wild-card slot.

Buffalo kept its postseason dreams alive thanks to a fourth-quarter touchdown pass from Tyrod Taylor to Justin Hunter to lift the Bills to a 28-21 win over the Jacksonville Jaguars (2-9). The San Diego Chargers (5-6) also stayed in the hunt thanks to their 21-13 win over the struggling Houston Texans (6-5), who still lead the AFC South.

Behind the Dolphins, the AFC is a jumbled mess as the Bills, Texans, Baltimore Ravens, Pittsburgh Steelers and Tennessee Titans all have six wins. The Steelers (6-5) beat the Indianapolis Colts (5-6) on Thursday while the Titans (6-6) evened their record with a 27-21 win over the Chicago Bears (2-9) on Sunday. The Ravens stayed tied with the Steelers atop the AFC North with a 19-14 win over the Cincinnati Bengals (3-7-1).

There is still a lot to be decided over the next five weeks as only the Dallas Cowboys (10-1), New England Patriots (9-2), Raiders and Seahawks appear to be postseason locks.

The winless Cleveland Browns, who fell to 0-12 with Sunday’s 27-13 loss to the New York Giants, and the 49ers (1-10) are the only teams already eliminated from playoff contention.

Jaguars receiver Allen Hurns fought for a 12-yard touchdown in the fourth quarter of Jacksonville’s 28-21 loss to the Buffalo Bills, but it was a costly score. Hurns grabbed his left hamstring after diving into the end zone and did not return to the game. The touchdown was his only catch…

The Most Prominent Seattle Seahawks on the Web 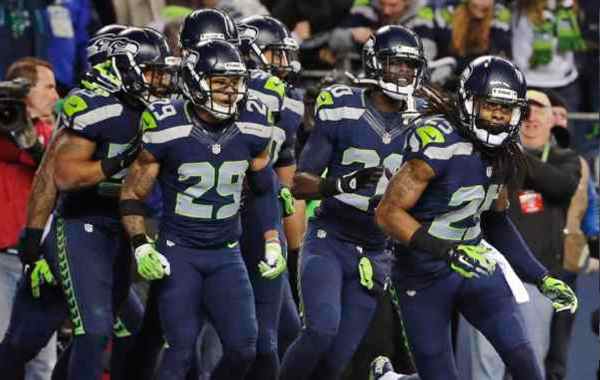 With all else going on in the world, vying for our attentions, as the week moves toward its close the primary concern for many has all the same become unambiguously clear; Super Bowl XLIX, and all that it encompasses and entails.