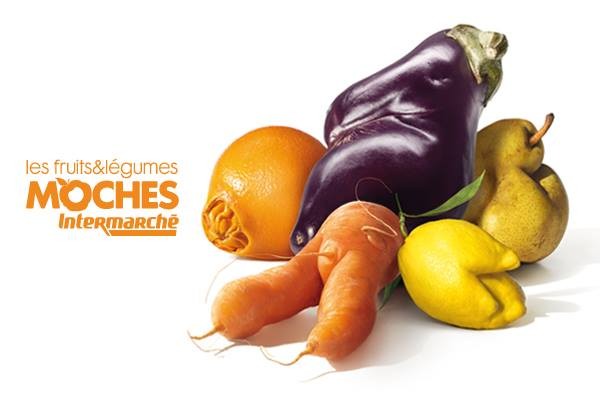 Intermarché, France’s third largest retail chain, has come up with a rather ingenious, and presumably profitable way to both (at least theoretically) combat food waste and turn what we’re sure is a tidy profit. They sell unsightly fruits and vegetables at a discount.

Traditionally, farmers discard those fruits and veggies that don’t conform to a certain aesthetic standard. Each year, literal tons of perfectly edible and healthy, but unattractive crops are trashed.

What Intermarché has done is dedicate an entire department within their stores to what they’ve branded “Inglorious Fruits and Vegetables”; complete with its own logo, labels, and ad campaign. From this department, the visually offensive foodstuffs can be purchased at a 30% discount.

Intermarché ostensibly launched this campaign in response to the European Union’s declaration of 2014 as the year to combat food waste.

“During the first two days, the store sold an average of 1.2 tons of ugly fruit and vegetables. The total number of customers in the store increased by 24%,” says the below promo video, which has been going viral. During its first month, the “Inglorious” campaign is said to have brought over 13 million customers into the stores.