‘Saturday Night Live’ in its 40th Season: The Current Cast and the Anniversary 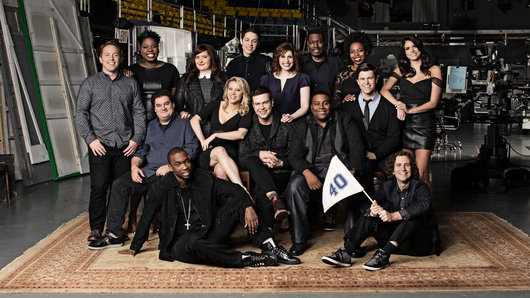 (Check out this terrific feature from the The Hollywood Reporter, highlighting some of the show’s writers from over the years, including such now household names as Conan O’Brien and Sarah Silverman.)

While in a bit of a transitional season, as happens every few years — where a young cast works to make the show their own — SNL is still going strong. The program which caused a revolution four decades ago, when the then 30-year old Lorne Michaels first brought it to TV, still finds its creator in the producer’s chair after all these years (excluding a well-documented 5-year break in the 80s), and remains an important showcase for young American comedy performers and writers.

(Read the current cast interviewing each other here.)

The current cast is packed to the brim with talent, and holds the potential to be one of the best the show has ever seen. Below, we’ve broken out the cast by PeekScore; ranking them not by their abilities nor even their fame, but by the degrees to which they’re each present, active, and/or making an impact on the Web.

(Read about how the 70-year old Lorne Michaels isn’t certain the show should go on without him here.)

Clicking each of the highlighted names in this entry will lead you to the corresponding funny-person’s PeekYou profile, from where you’ll be led to the best of what the Web has to offer of her or his life and work.