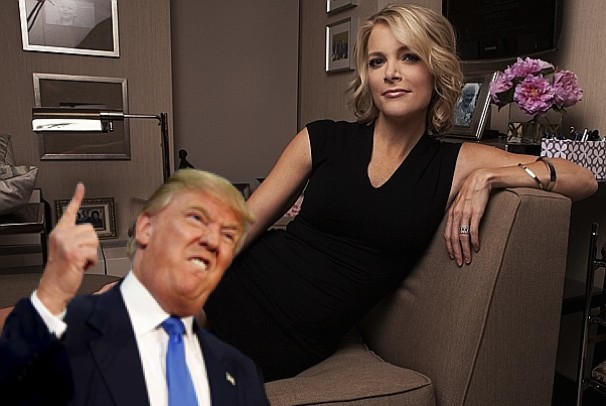 Since last Thursday night’s GOP debate on Fox News, two names have dominated the national dialogues; the first, Republican front-runner (and yes,that is still true) Donald Trump. and the other his prime chosen adversary and object of condescension and derision for the evening (and days following), Fox News anchor, and former attorney, Megyn Kelly.

Absent from the airwaves since the mess hit the fan last week, Kelly recently took to the cameras at first feigning ignorance to the hubbub. Coyly beginning by asking if she’s missed anything while she was gone. She continued, however.

“You may have heard there was a dust up involving yours truly and presidential contender Donald Trump. Mr. Trump was upset with a question I asked him at the debate last week about his electability and specifically comments he has made in the past about women.”

“A few words on that… Apparently, Mr. Trump thought the question I asked was unfair and felt I was attacking him. I felt he was asked a tough, but fair question. We agree to disagree.”

Kelly added that she would not respond to personal attacks Trump had made on her. In one case, the real estate tycoon phrased a critique in such a way that it could easily be interpreted to be suggesting that that the Fox News host was menstruating at the time of her questioning.

As he remains, at this time, a viable candidate for president, we — a people search company –have no opinion on the matter.

“Mr. Trump did interviews over the weekend that attacked me personally. I’ve decided not to respond,” Kelly said.

“Mr. Trump is an interesting man who has captured the attention of the electorate. That’s why he is leading in the polls. Trump, who is the frontrunner, will not apologize. And I certainly won’t apologize for doing good journalism,” she added.

“So I’ll continue doing my job without fear or favor,” Kelly concluded. “And Mr. Trump will continue with what has been a successful campaign thus far. This is a tough business and it’s time now to move forward. And now, let’s get back to the news.”

That settled, for now, we remind you that  can harness the mighty power of he world wide web to learn more about ALL the candidates currently vying for the slot of “most powerful person on Earth” — and all the trials and tribulations they encounter along the way — by clicking through here and exploring their PeekYou profiles.