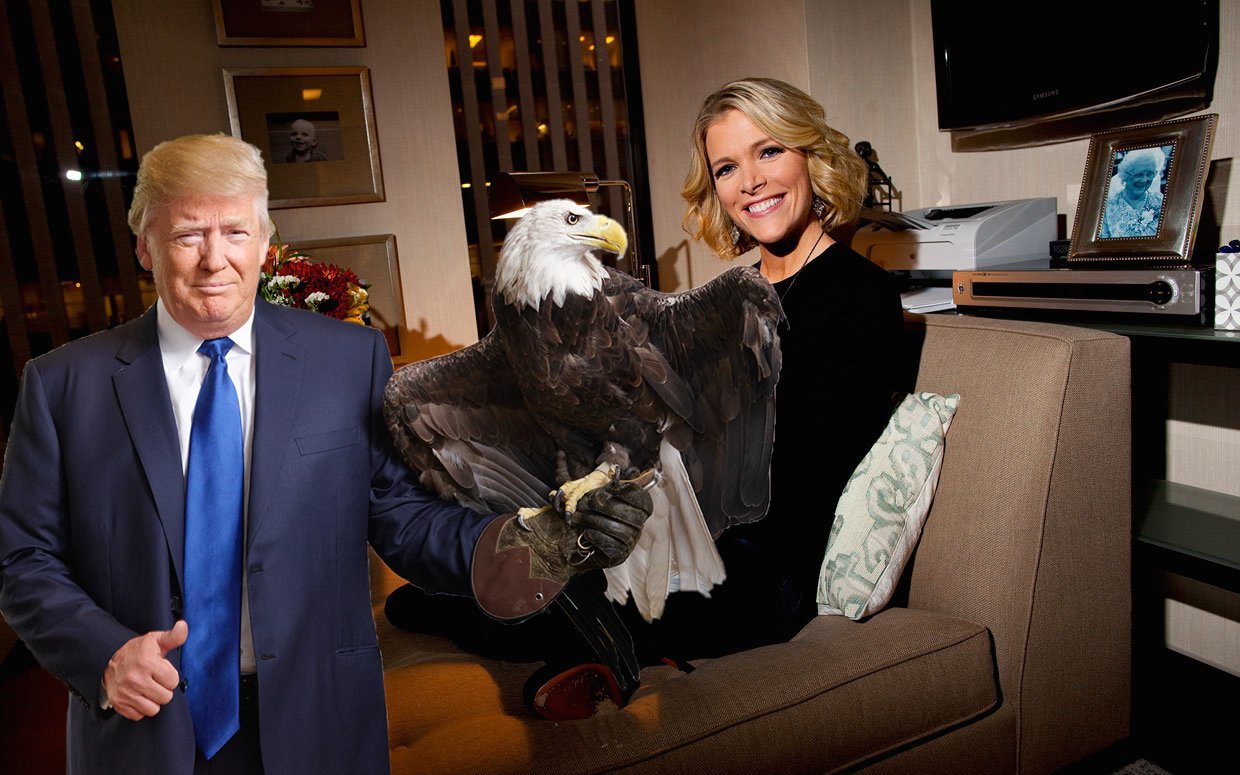 Before we start this article we want to remind you — the American public — that Donald Trump, yes that Donald Trump — a national laughing stock, by his own design, for basically as long as you can remember — is the current frontrunner for president of the united states. Should this play out as it conceivably could, however unlikely it might now seem, it will mean that Donald Trump will be president. Same job as Lincoln. Just saying.

Anyway, the GOP frontrunner has bafflingly made trolling one of Fox News’ top correspondents, the incredibly popular Megyn Kelly,  an unshakable cornerstone of his campaign strategy.

“The short-fingered vulgarian” rekindled his press-baiting war of words with the Fox News anchor Monday night. He blasted her coming back to the airwaves after a pre-planned 11-day vacation.

“I liked The Kelly File much better without @megynkelly,” Trump tweeted; reveling in his unprecedented twitter trolling strategy that has gotten him this far. “Perhaps she could take another eleven day unscheduled vacation!”

If this was a threat, it was too obscure to offend. But do recall, he’s a major, viable presidential candidate — Goodness help us — who takes time out of his busy day to troll major media figures on Twitter.

Roger Ailes, the chairman and CEO of Fox News, on Tuesday defended the anchor. REMEMBER THIS WAS AN ACTUAL STATEMENT THAT WAS DRAFTED AND DELIVERED. MEN CONVENED IN A CONFERENCE ROOM BEFOREHAND TO STRATEGIZE HOW BEST TO ADDRESS THIS:

“Donald Trump’s surprise and unprovoked attack on Megyn Kelly during her show last night is as unacceptable as it is disturbing. Megyn Kelly represents the very best of American journalism and all of us at Fox News Channel reject the crude and irresponsible attempts to suggest otherwise. I could not be more proud of Megyn for her professionalism and class in the face of all of Mr. Trump’s verbal assaults. Her questioning of Mr. Trump at the debate was tough but fair, and I fully support her as she continues to ask the probing and challenging questions that all presidential candidates may find difficult to answer. Donald Trump rarely apologizes, although in this case, he should.”

A Fox spokesperson said earlier this month that Kelly’s vacation was preplanned.
“The conspiracy theories about Megyn Kelly’s vacation rank up there with UFOs, the moon landing and Elvis being alive. Megyn is on a pre-planned, annual summer vacation with her family, which is much deserved,” the spokesperson said. “To imply otherwise as Donald Trump and his campaign operatives have is not only wildly irresponsible, but downright bizarre.”

And dare we add, irrelevant. Trump is running against 16 candidates, not a single one of whom is Megyn Kelly. WHY IS THIS BEING ALLOWED TO HAPPEN?

The Republican candidate’s unprovoked assault of Kelly was his latest salvo in a campaign launched against the former attorney turned anchor since the the two allegedly clashed over the GOP presidential debate on Aug. 6.

Trump did return to Twitter to comment on Ms. Kelly’s return to the air. As expected, he was not impressed.

“@megynkelly must have had a terrible vacation, she is really off her game.”