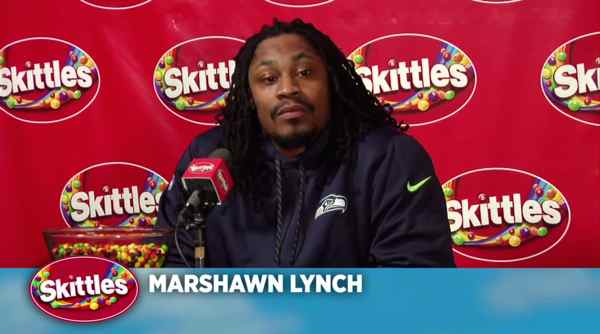 Indeed, the NFL itself reportedly threatened to fine Lynch if he didn’t appear at their pre-Super Bowl XLIX, Media Day event (which he did attend, but at which he outright said “I’m just here so I don’t get fined”).

But one authority even higher than the league, in the eyes of Lynch, was able to persuade him to participate in a press conference this week; Skittles, the bite-sized, fruit flavored candy.

Lynch’s love of the chewy, addictive treats was well-documented for some time, but the brand simply didn’t make it their custom to seek out celebrity or athletic spokespeople. Last year, however, they relented. Lynch and the candy have been in a partnership since.

The amusing, satirical video below — which has gone viral in the run up to Sunday’s Super Bowl — is one of the results of this match made in candy heaven.