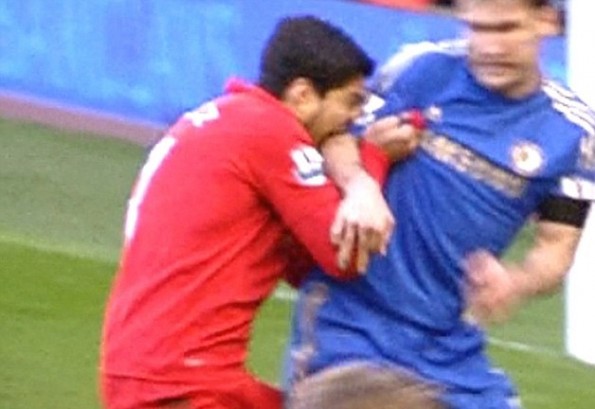 Uruguayan national team soccer player, Luis Suárez (PeekYou profile here), started the 2013-2014 season back in the UK — where he plays for the Premiere League club Liverpool — on suspension for biting Branislav Ivanovic of Chelsea.

PLEASE NOTE: This entry contains an update below

That event cast a long shadow out from under which Suárez spent the season trying to emerge, but in the end he wound up leading the league in goals, with his image largely restored. That was, until today.

It seems that during today’s Uruguay vs. Italy World Cup match, Suarez got hungry again, and went all Nosferatu on Italian player Giorgio Chielleni.

This is, apparently, the third time Suárez has bitten a player. Deadspin writes of it more here.

Suárez, it should be noted, is also one of the names on our PeekScore list of the Internet’s biggest soccer players; which you can peruse for yourself here.

UPDATE: FIFA have handed down their punishment; banning Suárez for nine matches, and from all football related activities for four months. Read more here.

Now here’s some lousy video of the bite, but a better res clip can be seen at the Deadspin link above.