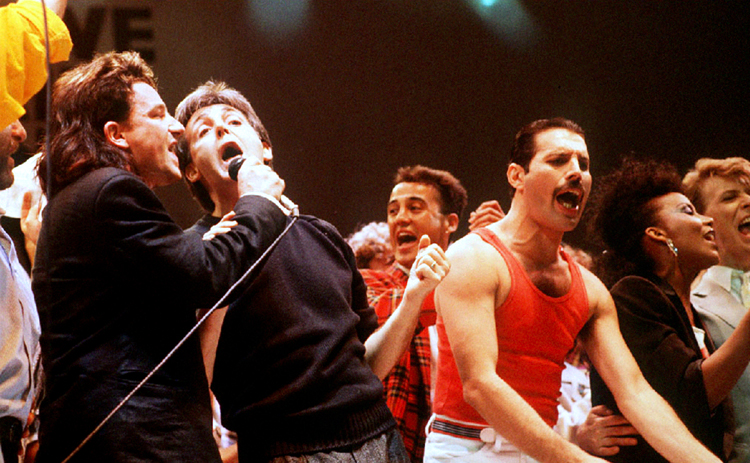 (Remember: Clicking the highlighted names in this entry will lead you to other parts of PeekYou, from where you can use the Web to learn more about the subjects being discussed.)

Designed to raise money for Ethiopian famine relief, the event consisted of two all-star, all-day stadium rock concerts; one at London’s Wembley Stadium, with 72,000 people in attendance, and one at Philadelphia’s JFK Stadium, with 100,000 in attendance. The concerts were connected, beaming performances to one another via satellite link-up, and broadcast to a global television audience of nearly 2 billion people, across 150 countries.

In short, it was a really big deal at the time.

The event was organized by Boomtown Rats lead singer Sir Bob Geldof; who the previous autumn had organized the enormously successful, all-star “Do They Know It’s Christmas?” charity single, which in turn inspired Michael Jackson, Lionel Richie, and Quincy Jones to create the even bigger “We Are the World” record. Both also focused on raising awareness of, and money for, the Ethiopian famine.

The Web is abuzz with reminiscences of that historic day, and you can check out a terrific oral history of the event at Yahoo here.

A charitable trust, founded in part by Geldof and dedicated to eradicating poverty throughout Africa, still exists. You can visit their website and learn more about their work here.

Rather than add our reminiscences of that day 30 year ago, we’ll show them. Here are the two performances most often cited as the day’s highlights. First, the late, great Freddie Mercury and Queen, doing what he and they did better than anyone:

And next, the pride of Dublin, a still then relatively young U2: