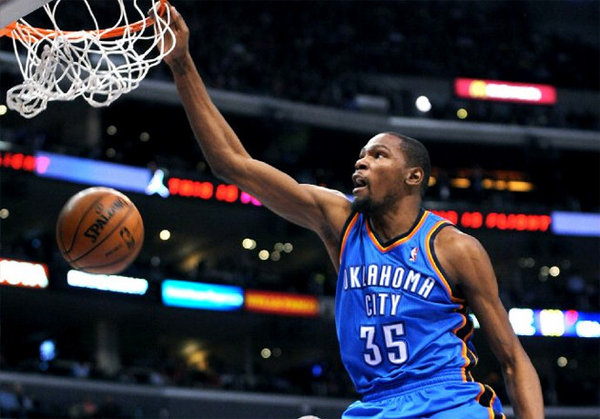 Oklahoma City Thunder star, Kevin Durant (PeekYou profile here), was named the NBA‘s 2013-2014 MVP; and the speech he gave on Tuesday when accepting the award was gracious, moving, and disarmingly authentic.

Durant made a point of expressing gratitude to everyone; most poignantly Wanda Pratt, his mother. “You made us believe, you kept us off the streets, put clothes on our backs, put food on the table,” Durant told his mom, who was in attendance. “You the real MVP.”

He also singled-out veteran player Caron Butler, who placed a note in Durant’s locker, shortly after he signed with the Thunder, that read “KD MVP.”

“I don’t really say much in those moments, but I remember that,” Durant said. “I go home and I think about that stuff, man. When you got people behind you, you can do whatever.”

Durant averaged 32 points a game during the regular season, winning his fourth scoring crown in five years. The 6’9″ forward helped the Thunder go 59-23, second-best in the league.

The life and dazzling career of Mr. Durant can be followed via the many links to be found upon his PeekYou profile; leading you to social pages, homepages, team pages, fan pages, videos, photos, interviews, and more.

Below are highlights of the speech:.

And here’s the speech in full: