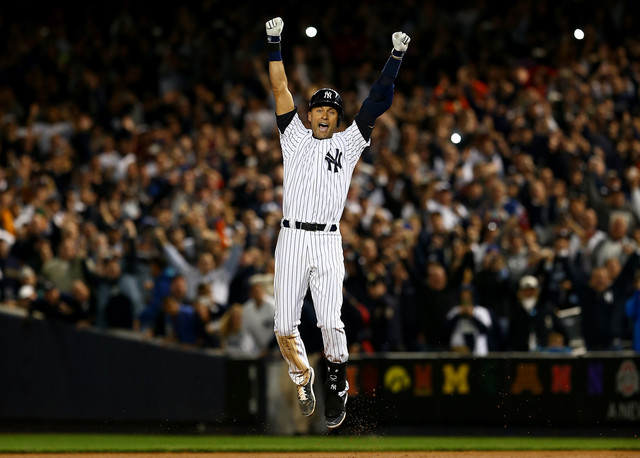 Grousing grinches be darned, long-standing New York Yankees shortstop, and future Hall of Famer, Derek Jeter, played his last home game on Thursday night, and it turned out to be quite the show.

Tickets to the game were going for an average of about $830 a pop, and the weather was anything but pleasant; a muggy, drizzly mess. But none of this prevented Yankees Stadium from selling out, and none of it deterred the throngs from heaping mountains of heartfelt adoration upon their hometown hero.

While the Yanks were knocked out of pennant contention earlier in the week, their opponents — the Baltimore Orioles — are actually going in to the post-season. This didn’t prevent the Yanks from playing this special game to win it.

The Yanks were up by three runs when the Orioles rallied to tie the game at the top of the ninth inning. Jeter at his last at bat, however, hit a single to right field, driving in the game winning run.

The place went berserk, as though the Yanks had just won the Series. The Yanks’ dugout cleared, and stormed the field to celebrate this meaningless win courtesy of their beloved Captain.

“Our guys, everybody has a lot of respect for Derek and what his career has been about,” Orioles manager Buck Showalter offered in the aftermath. “You never like to lose a game, but you try to keep a grip on reality and the whole gamut of it. We wish him well, and I’m sure it was a great moment for him here. And it will be a great moment for us as we go forward to continue to play.”

Jeter’s actual final games will be against the Boston Red Sox at Fenway Park over the weekend. Jeter has said that he will most likely not be playing shortstop during the games, however (meaning he’ll probably just be DH), wanting his last time on the field to be at home. Jeter added, though, “Out of respect to the Boston fans and the rivalry I will play in some capacity.”