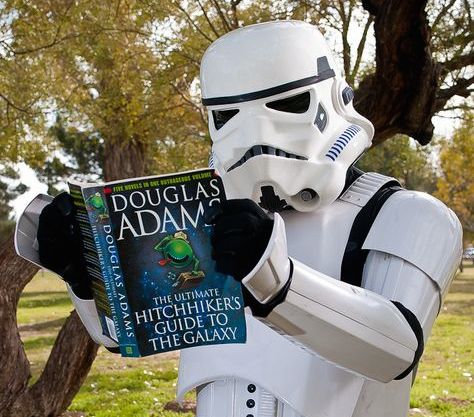 May 25th is — among other more solemn and meaningful things (at least this year) — Geek Pride Day.

What’s the significance of May 25, in the context of geekdom? Among other geektastic events, it marks the anniversary of the 1977 release of the first Star Wars film; Episode IV: A New Hope. You’re likely all familiar with that.

What the heck is Towel Day? It’s a really silly way some nerds devised to pay tribute to the life and works of Douglas Adams, a really funny author, and the man behind the Hitchhiker’s Guide to the Galaxy novels (as well as TV series, radio program, film, computer game, and so forth).

The first Towel Day took place on May 25, 2001 (as reported here by USA Today); two weeks to the day after the tragic May 11 death of Adams that same year. But, as these things will do, it seems to have gained some momentum in recent years; aided and abetted by social media, no doubt, and the inherent appeal of a good meme, particularly one related to a beloved property.

The importance of towels was outlined by Adams in chapter three of the first Hitchhiker’s novel, as such:

A towel, it says, is about the most massively useful thing an interstellar hitchhiker can have. Partly it has great practical value. You can wrap it around you for warmth as you bound across the cold moons of Jaglan Beta; you can lie on it on the brilliant marble-sanded beaches of Santraginus V, inhaling the heady sea vapours; you can sleep under it beneath the stars which shine so redly on the desert world of Kakrafoon; use it to sail a miniraft down the slow heavy River Moth; wet it for use in hand-to-hand-combat; wrap it round your head to ward off noxious fumes or avoid the gaze of the Ravenous Bugblatter Beast of Traal (such a mind-bogglingly stupid animal, it assumes that if you can’t see it, it can’t see you); you can wave your towel in emergencies as a distress signal, and of course dry yourself off with it if it still seems to be clean enough.

More importantly, a towel has immense psychological value. For some reason, if a strag (strag: non-hitch hiker) discovers that a hitchhiker has his towel with him, he will automatically assume that he is also in possession of a toothbrush, face flannel, soap, tin of biscuits, flask, compass, map, ball of string, gnat spray, wet weather gear, space suit etc., etc. Furthermore, the strag will then happily lend the hitch hiker any of these or a dozen other items that the hitch hiker might accidentally have “lost.” What the strag will think is that any man who can hitch the length and breadth of the galaxy, rough it, slum it, struggle against terrible odds, win through, and still knows where his towel is, is clearly a man to be reckoned with.

Hence a phrase that has passed into hitchhiking slang, as in “Hey, you sass that hoopy Ford Prefect? There’s a frood who really knows where his towel is.” (Sass: know, be aware of, meet, have sex with; hoopy: really together guy; frood: really amazingly together guy.)

—Douglas Adams, The Hitchhiker’s Guide to the Galaxy

And beyond even that association, the day marks “The Glorious 25th of May,” which fans of author Terry Pratchett’s Discworld novels celebrate.

So, it’s a perfect storm of nerdy stuff and the geeks of the world — or at least of the internet — have decided to make a thing of it. Time makes a thing of it here so you can learn more.

Visit the official Towel Day website to learn how to mark that specific facet of this auspicious occasion. And visit Adams’ PeekYou profile — by clicking his highlighted name above — for loads of media relating to all facets of his great work and life, and clicking the words Star Wars will navigate you to many other areas of PeekYou related to that much beloved pop culture behemoth.

Here is the first episode of the 1981 BBC Hitchhiker’s TV series, the remainder can be found by clicking through to the source, and are well worth your while; whether familiar with the works of Adams before now or not.