‘Guardians of the Galaxy’ in Theaters this Weekend 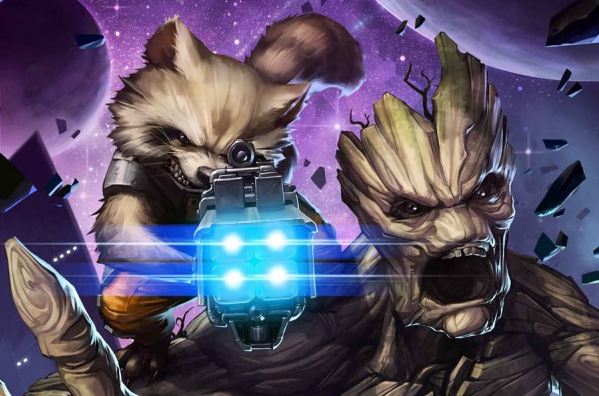 It’s a massive testament to the powerful brand Marvel Studios has built over the past six years that the August 1st opening of Guardians of the Galaxy has been the focus of online buzz for many months now.

While the predicted opening weekend of $65-70 Million seems about par for the course with a new Marvel title, the upper echelons of those estimates could find the film as the all-time box-office champ among August releases.

As unlike Captain America, Thor, or Iron Man, Guardians is not based on a comics title widely known outside the realm of superhero fandom, this type of an opening is truly a tribute to the reputation Marvel, along with help from their parent company Disney, has built for itself.

Guardians is an adaptation of one of Marvel‘s more offbeat titles; featuring, as it has, among other things, a gun-wielding, wise-cracking raccoon and his tree-creature sidekick (voiced, in their cinematic incarnations, by Bradley Cooper and Vin Diesel, respectively).

The film has been getting positive reviews, largely, brandishing a respectable Metascore of 76 on Metacritic, and a legitimately impressive 88% Fresh rating on Rotten Tomatoes.

Visits to Gunn’s and Pratt’s PeekYou profiles will lead you to mountains of videos, photos, articles, anecdotes, rumors, interviews, and much more, relating to Guardians, it’s now announced sequel (coming 2017), and the many other projects with which they each are and/or have been involved.