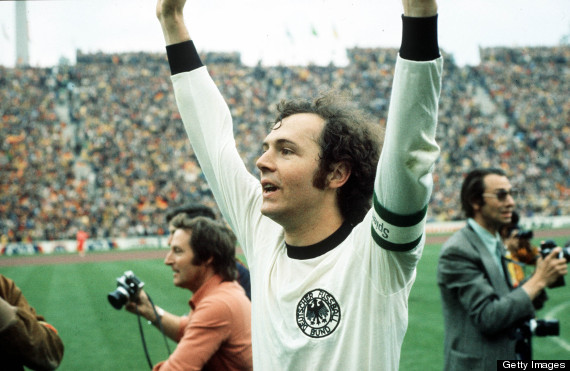 German football legend, Franz Beckenbauer (PeekYou profile here) is currently embroiled in controversy, and has been banned by FIFA from any official participation in soccer for 90-days, due to a breach of the organization’s ethics code.

The controversial global governing body for the sport — and the ones behind the World Cup tournament to which most of the world is paying attention at the moment — alleges that Beckenbauer, a FIFA board member, failed to cooperate with an ethics investigator named Michael Garcia, who was looking into allegations of bribery connected to the selection process behind the planned 2022 World Cup in Qatar. Specifically, he is investigating allegations of corruption, and an unfair swaying of the voting board’s influence on the part of Qatar official Mohamed bin Hammam.

For the Americans not familiar; in a manner similar to the Olympics, locales — but entire countries, as opposed to cities — bid feverishly and competitively to host the World Cup, which takes place every four years. Winning the bid comes with all the prestige and pitfalls you’d expect.

It’s also been suggested that due to various business dealings of Beckenbauer’s, he may have stood to profit personally from a Qatar based World Cup. Although it’s not known for what country he voted, it would seem these are the sorts of questions Mr. Garcia had planned to ask.

The organization’s statement regarding the ban said that Beckenbauer had refused “repeated requests for his assistance, including requests that he provide information during an in-person interview or in response to written questions provided in both English and German.”

Beckenbauer himself has said, as is quoted by the Daily Mail here:

In an exclusive interview with Sportsmail’s Jeff Powell earlier this month, Beckenbauer raised worrying doubts about the efficiency of the probe into the Qatar 2022 World Cup bribery allegations.

The German icon confirmed he was contacted by the commission led by lawyer Michael Garcia, who is due to report after the World Cup in Brazil.

Beckenbauer said: ‘They sent me a questionnaire but it was in English and it contained some complex legal issues. So I asked them to re-send it to me in German.

‘I have heard nothing from them since.’

The Kaiser is a good English speaker but added: ‘I wasn’t comfortable about responding to such technical questions in anything but German.’

Those most actively opposed to Qatar being awarded the 2022 Finals may not have welcome one answer Beckenbauer would have given.

Of the allegations that disgraced former FIFA executive Mohammad Bin Hamman paid cash for votes, Beckenbauer said: ‘As usual the ballot was secret.

‘I am not revealing which country I voted should host those Finals. Nor do I know who Bin Hamman voted for. We worked together on the FIFA executive for four years and I regarded him as a friend.

‘But I can assure that I was never approached about my vote, nor was I ever offered anything.

‘If any allegations of corruption are proved then there is an argument for a re-vote.

‘One benefit of the Qatar bid is that that in complying with FIFA’s requirements they are constructing 12 stadia. They don’t need 12 grounds near each other.

‘They only need one new stadium so they are constructing in a way that 11 of them can be taken down after the World Cup, sent to countries in need around the world, where they be reassembled.’

Beckenbauer is also on the record as saying the Qatar World Cup would have to be played in winter.

It is unclear whether this suspension precludes Beckenbauer — a former World Cup winner as both a player and coach — from attending the tournament in Brazil.

And below, an overview of some of the less complicated, and more glory-filled days in the Kaiser’s life and career: