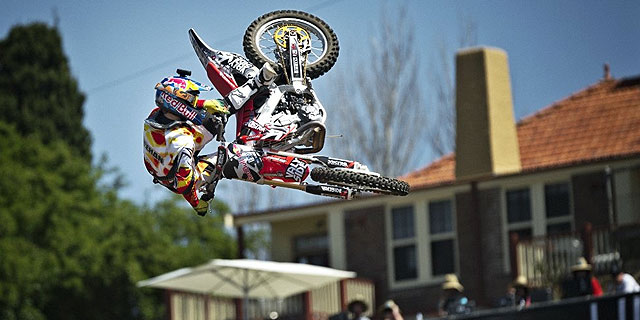 Aussie freestyle motocross pro, Josh Sheehan, has been described by some as a legend for some time; but now it seems there will be no one who could dispute the title.

He recently placed his name in the record books by being the first rider in the sport’s history to land an astounding triple backflip.

Born and bred in Dannybrook, Australia, Josh accomplished this mind-boggling feat at fellow pro Travis Pastrana‘s Pastranaland compound in Maryland. It was done using a custom-built ramp, and the stunt was planned for over a year.

While rehearsed with an airbag numerous times prior, the final jump was pretty much entirely and quite literally “do or die.” As is said at the opening of the video clip below, there were only “two outcomes; roll away on two wheels, or roll away on four wheels to the hospital.” On this day, Josh chose the former and it was awesome.

Check it out below, and then click Josh’s highlighted name above to visit his PeekYou profile and investigate the best of what the Web holds of his life and insane career.