Harry Potter author, J.K. Rowling, has the Internet buzzing and pondering this week, in response to a small assortment of inscrutable tweets.

It all started when Rowling posted of being busy, writing a novel and other such things. Pretty straightforward. But, innocent sharing gave way to fuss when a fan responded to Rowling’s tweet, prompting the author to respond in kind (as illustrated below):

What could be so tempting, the internet wondered? Well, on Monday Rowling provided her threatened riddle and/or anagram. Presumably. 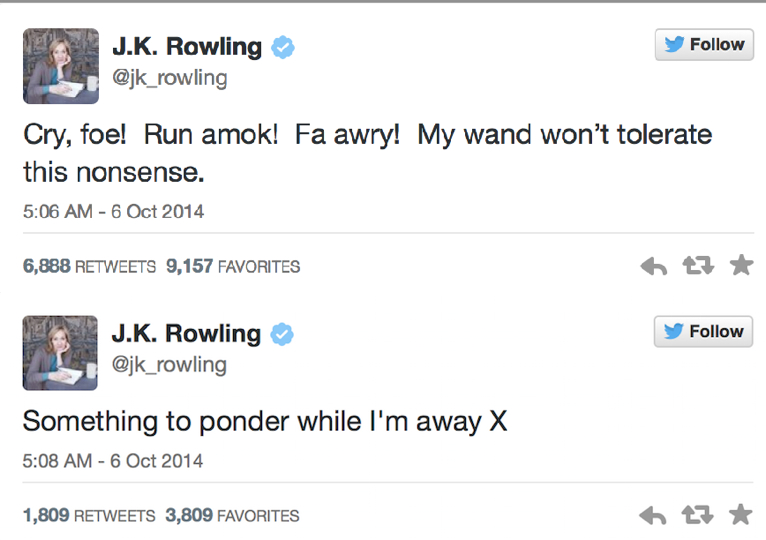 The screenplay to which the author was referring was most likely that for Fantastic Beasts and Where to Find Them; the first installment of a planned film franchise, based on a bit of Potterverse ephemera, originally published in 2001 (ostensibly one of Harry’s fictional wizardry textbooks made real). So, are her tweets about it?

OR, are they about the novel, and does this novel also take place in the theoretically largely retired Potterverse. Many of course, millions even, are hoping “yes.”

Updated: The riddle was solved? here.

You can keep up with the Fantastic Beasts films, any updates on this riddle, as well as many other aspects of Ms. Rowling’s life and career via the many links to be found upon her PeekYou profile.