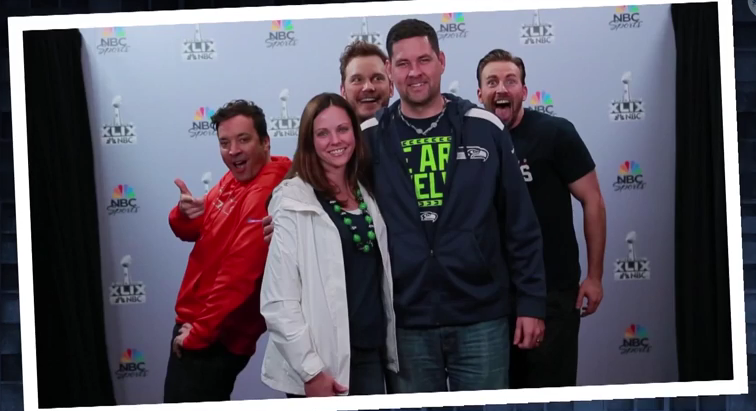 As you may have heard, two of Marvel Studios‘ leading men — two of the three named Chris; Guardians of the Galaxy’s Chris Pratt and Captain America’s Chris Evans — made a Super Bowl bet.

The gist of the bet, with Pratt a fan of the Seahawks and Evans a Boston native and Patriots devotee, was that the loser had to pay a visit to the charity of the winner’s choosing, in costume. As it turned out, regardless of Evans’ victory, both charities received visits from Star Lord and Captain America.

Christopher’s Haven, the Boston based charity with which Evans is affiliated — which provides housing for families of pediatric cancer patients — has said that the bet has directly helped them raise over $11k from fans so far.

The two leading men hooked up with Jimmy Fallon before the Big Game, and the three had some fun photobombing unsuspecting fans (on camera, for The Tonight Show, naturally).

Not willing to settle for mere bunny ears, thumbs ups, or more standard photobombing fare, the three wound up capering about like (handsome, rich) jackasses and the result has been viral video gold.

Check out the clip for yourself below, and check out all the fabulous supermen and mere mortals listed above — via the countless useful links to be found upon their PeekYou profiles — by clicking the highlighted names above.