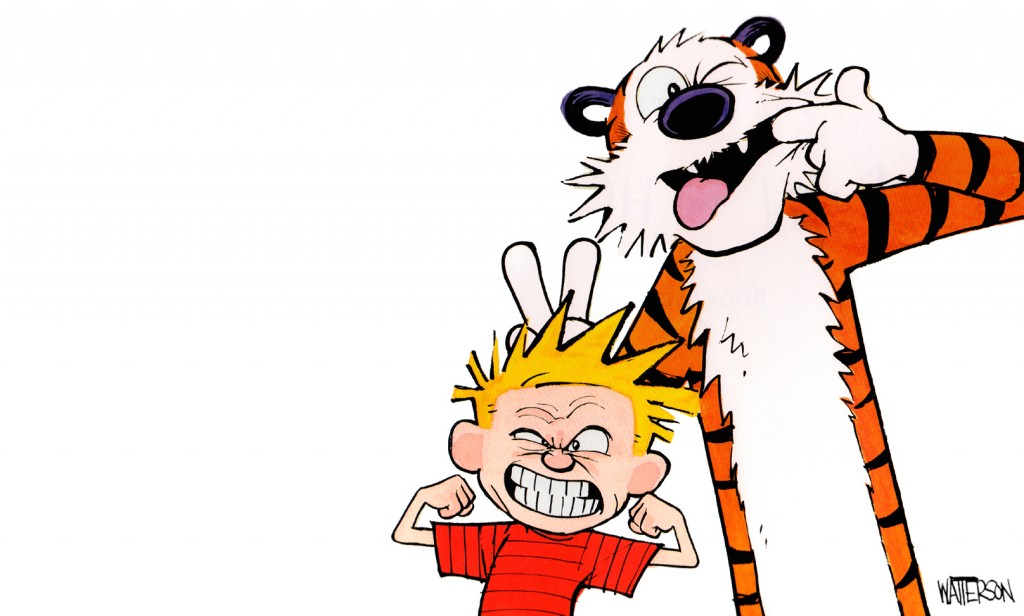 Readers of syndicated newspaper comic strip Pearls Before Swine were gifted with a secret treat this Sunday, as bona fide funny pages legend, Calvin and Hobbes‘ long-retired Bill Watterson (PeekYou profile here), emerged, if only for one panel.

Here’s the strip as it ran:

Former attorney, and now Swine cartoonist, Stephan Pastis (PeekYou profile here), had struck up an email friendship with the media-shy Watterson; from which the idea of working together emerged.

Pastis wrote of the collaboration; “The idea I proposed was that instead of having me get hit on the head, I would pretend that Pearls was being drawn by a precocious second grader who thought my art was crap. I named her ‘Libby,’ which I then shorted to ‘Lib.’ (Hint, hint: It’s almost ‘Bill’ backwards.)”

Watterson offered: “Several years ago, when Stephan did one of his strips that mocked his own drawing ability and mentioned my strip in comparison, I thought it might be funny for me to ghost ‘Pearls’ sometime, just to flip it all on its head. It was just a silly idea, and I didn’t know Stephan, so I never pursued it, and years went by.”

Here’s a strip where Stephan did just that:

You can see what Watterson had to say to The Washington Post about it all in-full here.

Watterson’s Calvin and Hobbes — which told the ongoing story of a young boy and his tiger best friend — ran for the last time in 1995. Since then, Watterson has laid low, dedicating his energies to painting. In 2010, he wrote of his decision to end the incredibly beloved and respected strip:

This isn’t as hard to understand as people try to make it. By the end of ten years, I’d said pretty much everything I had come there to say. It’s always better to leave the party early. If I had rolled along with the strip’s popularity and repeated myself for another five, ten, or twenty years, the people now “grieving” for Calvin and Hobbes would be wishing me dead and cursing newspapers for running tedious, ancient strips like mine instead of acquiring fresher, livelier talent. And I’d be agreeing with them. I think some of the reason Calvin and Hobbes still finds an audience today is because I chose not to run the wheels off it. I’ve never regretted stopping when I did.

A visit to Bill’s PeekYou profile will grant you the opportunity to see what the Internet has to offer of this cartooning giant; including many articles, reproductions of his comics, points of purchase, video, and more.