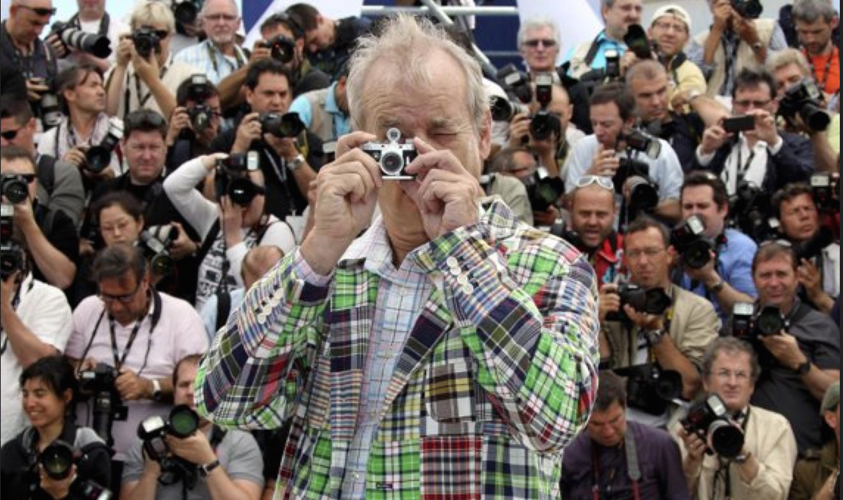 The tales of Bill Murray (PeekYou profile here) spontaneously regaling fans with his scruffy and loveable company, possibly buzzed wit, and hard-earned wisdom — at parties, bars, and karaoke nights alike — are colorful and plentiful, and have surely only contributed to his legendary status.

This Memorial Day weekend found one more such incident transpiring, and Deadspin has video here.

After initially declining urging from the attendees, Mr. Murray surprised all by popping in on a Charleston, South Carolina bachelor party. To the gathered Boston College alumni, he imparted the following wisdom:

“Listen here, I’m gonna give you all advice, cause it’s too late for this one… here’s what I recommend to you. If you have someone that you think is The One, don’t just sort of think in your ordinary mind, ‘Okay let’s make a date, let’s plan this and make a party and get married.’ Take that person and travel around the world. Buy a plane ticket for the two of you to travel all around the world. And go to places that are hard to go to and hard to get out of, and if when you come back to JFK, when you land in JFK and you’re still in love with that person, get married at the airport.”

“Over Memorial Day weekend, 20 of my buddies from Boston College got together in Charleston for our friend EJ’s bachelor party. At one point during dinner at a steakhouse, one guy goes to the bathroom downstairs and sees Bill Murray sitting with some people with a fishing vest on. We talked to the waiter to see if we could send him some drinks, to which Bill declined. One of my buddies then went down and asked if he’d come up and say a few words for EJ and got a “No thanks.” My buddy comes back up dejected and tells us it’s not going to happen. Two minutes later, Bill #$%@-ing Murray walks into the room and gives this speech.”

A visit to Deadspin from the link above will show you the video, and a visit to Bill’s PeekYou profile will show you loads of other videos — including those with names such as Stripes, Groundhog Day and Quick Change — as well as photos, articles, interviews, fan pages, and much, much more.