BBC One has taken to its Twitter account to tease fans of their always magnificent Sherlock with an image of stars Benedict Cumberbatch and Martin Freeman, duded up in Victorian splendor.

The image was posted with the hashtags #221back (a reference to Sherlock Holmes’ canonical street address of 221 Baker Street, of course), #Sherlock, and #notkidding. We never believed they would joke about such a thing, but we’re grateful for the assurance provided by the last hashtag nonetheless. 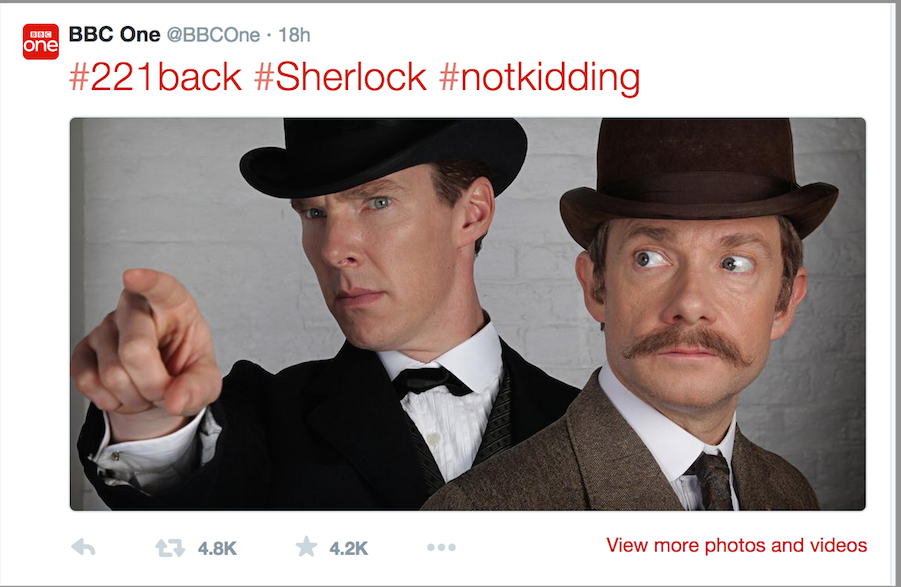 The program isn’t set to return to TV until Christmas of 2015, for a one-off Christmas Special; which is to begin filming in January. The long-awaited fourth series of Sherlock — each series consisting of three 90-minute episodes — will air after that in 2016. In the meantime, however, we DO have this tweet to keep us entertained.

Freeman and Cumberbatch both have roles in the upcoming The Hobbit: The Battle of the Five Armies; with Freeman in the title role, and Cumberbatch — via motion capture — playing the dragon Smaug.

Both actors, of course, have been busy. In addition to The Hobbit flicks, Freeman found great success and accolades this year for his small screen turn in FX‘s unexpected ratings and critical hit, Fargo. He’ll also be hosting SNL on December 13. Cumberbatch has been in a million things lately, but has major Oscar buzz on him this year for his performance in The Imitation Game.

And here, the show’s two brilliant co-producers, Steven Moffat and Mark Gatiss, discuss the thing in their charming ways: