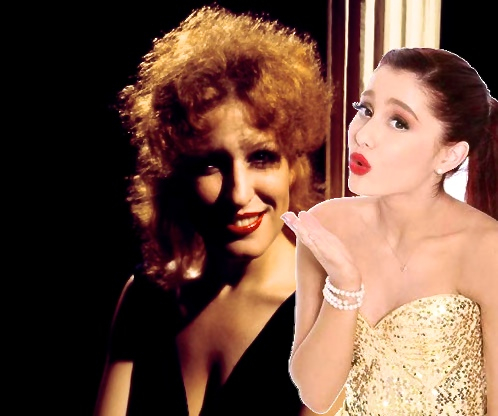 It seems the 68-year old Divine Miss M herself, Ms. Bette Midler, doesn’t much care for Ariana’s public persona, and accompanying manner of dress and presentation.

In an interview published in The Telegraph this week, Midler shared the following vitriol:

“It’s terrible! It’s always surprising to see someone like Ariana Grande with that silly high voice, a very wholesome voice, slithering around on a couch,” – here, she does some slithering herself – “looking so ridiculous. I mean, it’s silly beyond belief and I don’t know who’s telling her to do it. I wish they’d stop. But it’s not my business, I’m not her mother. Or her manager. Maybe they tell them that’s what you’ve got to do. Sex sells. Sex has always sold.”

Ariana, and/or at least Team Ariana, exhibited tremendous poise and class on Wednesday by responding with the following: 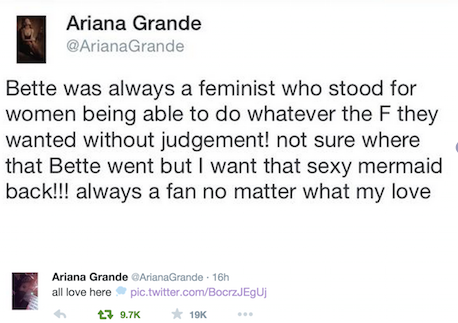 Oddly, Big Bang Theory‘s Mayim Bialik, the actress who played the childhood version of Bette’s character in the treacly 1988 megahit, Beaches, recently got some attention for her own public judgment of Grande’s choices in wardrobe and overall presentation.

Best we can tell, Ariana’s gliding along relatively unscathed by the assorted opinions of the disapproving, having had a fairly banner year in the biz.

But, like Ariana, we also love Bette. And so, with that, Bette in her prime doing Dylan:

And Ariana in the here and now, doing Barbarella: